Background
We analyzed the terms of venture financings for 124 companies headquartered in Silicon Valley that reported raising money in the second quarter of 2013.

Overview of Fenwick & West Results
While valuation related results for 2Q13 were generally healthy, certain trends bear watching. Specifically, although the percentage of up rounds declined only mildly, to 64%, the number of down rounds doubled to 22%. Additionally, while the average share price increase improved modestly compared to 1Q13 (62% to 57%), the median share price was relatively low at 19%, and for the second quarter in a row was noticeably below the 30% average median increase in 2012.

Here are the more detailed results.

Overview of Other Industry Data
Third party reports of the venture environment for the second quarter of 2013 showed:

Similarly, the PwC/NVCA MoneyTree™ Report based on data from Thomson Reuters (the "MoneyTree Report") reported a 13.5% increase in venture investment and a 6% increase in venture financings from 1Q13 to 2Q13. They reported that $6.7 billion was raised in 913 financings in 2Q13 compared to $5.9 billion raised in 863 financings in 1Q13 (as reported in April 2013). 1 The MoneyTree Report also noted that biotech investment increased 41% from 1Q13 to 2Q13.

Both services reported that venture investment in 1H13 lagged 1H12.

CB Insights and TechCrunch each reported that venture investing trended up noticeably as 2Q13 progressed.

Thomson Reuters reported similar results and noted that there were the most biotech IPOs in a quarter since 3Q00.

The increase in healthcare IPOs was attributed to increasing new drug approvals (the 39 new drugs approved by the FDA in 2012 was the highest since 1997) and strong performance by public biotech companies. (VentureWire, Rockoff and Demos, July 1, 2013).

Merger and Acquisition Activity
VentureSource reported an 11% decline in the number of venture backed U.S. companies that were acquired, but a 66% increase in the amount paid for such acquisitions, in 2Q13 compared to 1Q13 (as reported in April 2013). 1 Specifically there were 84 transactions for $8.0 billion in 2Q13 compared to 94 transactions raising $4.9 billion in 1Q13. This was the fewest number of acquisitions in a quarter since 3Q09.

Similarly, VentureSource reported a 15% decline in fundraising in 1H13 compared to 1H12.

Venture Firm Trends
The environment in which venture firms operate has changed significantly in recent years, with the growth of micro-VCs, accelerators, angels, crowd funding, investor matching sites and secondary exchanges. Additionally limited partners have become more willing to question their relationship with general partners, as evidenced by the Kauffman Report opining that the limited partner/general partner relationship needed changes.

These changes have been driven in large part by the reduced need for capital to start new IT companies, mediocre venture investment returns over the past decade, changes in the legal environment, and external economic events that have reduced liquidity exits, especially IPOs.

In response, some venture capitalists are making changes to their operating model.

Another example is the "community" model, exemplified by First Round Capital, which has created a web platform to transform their portfolio companies into a community where entrepreneurs can exchange information, ideas and best practices among themselves.

Corporate VC Investing
The MoneyTree Report reported that 13.5% of all amounts raised in venture deals in 2Q13 came from corporate venture capitalists ("CVCs"). This was a significant increase from the 8.35% average over the prior 4 quarters. CVC investment percentages at this level had not been seen since 2001. CVCs were especially active in telecom, networking, biotech and cleantech, where they invested in over 17.5% of all venture deals.

GoogleVentures was the fourth largest investor (by number of deals) in 2Q13 according to VentureSource.

Angels and Accelerators
The Halo Report for 1Q13 reported that for angel only rounds, the median round size was $680,000, a five quarter high, the median pre-money valuations were stable at $2.5 million and that 67% of investment went into internet, healthcare and mobile/telecom companies.

AngelList announced a service that lets angel investors syndicate a deal with each other and allows the lead angel to collect a carried interest from other participating angels, according to TechCrunch.

Venture Capital Return
Cambridge Associates reported that the value of its venture capital index increased by 2.5% in 1Q13 (2Q13 information has not been publicly released), but this lagged the 8.2% increase in Nasdaq. For longer time frames, the venture capital index surpassed Nasdaq for the 3 year period and for 15 years and longer, but trailed for the 1, 5 and 10 year period, and trailed the S&P 500 for all periods of less than 15 years.

An article to be published in the Journal of Finance reports that despite these disappointing results, investors in not only the first quartile of venture funds, but also the second quartile, have beaten public market investments since 2000. (VentureWire, John Shinal, June 14, 2013).

Venture Capital Sentiment
The Silicon Valley Venture Capitalists Confidence Index® by Professor Mark Cannice at the University of San Francisco reported that the confidence level of Silicon Valley venture capitalists was 3.78 on a 5 point scale in 2Q13, a slight increase from 3.73 in 1Q13 and the fourth consecutive quarterly increase in the index. Reasons given for the increase included high expectations for disruptive technologies such as cloud, mobile and social, declining uncertainty in the macro economic environment, and the limited availability of venture capital funds, which were expected to result in an improvement in venture capital returns. 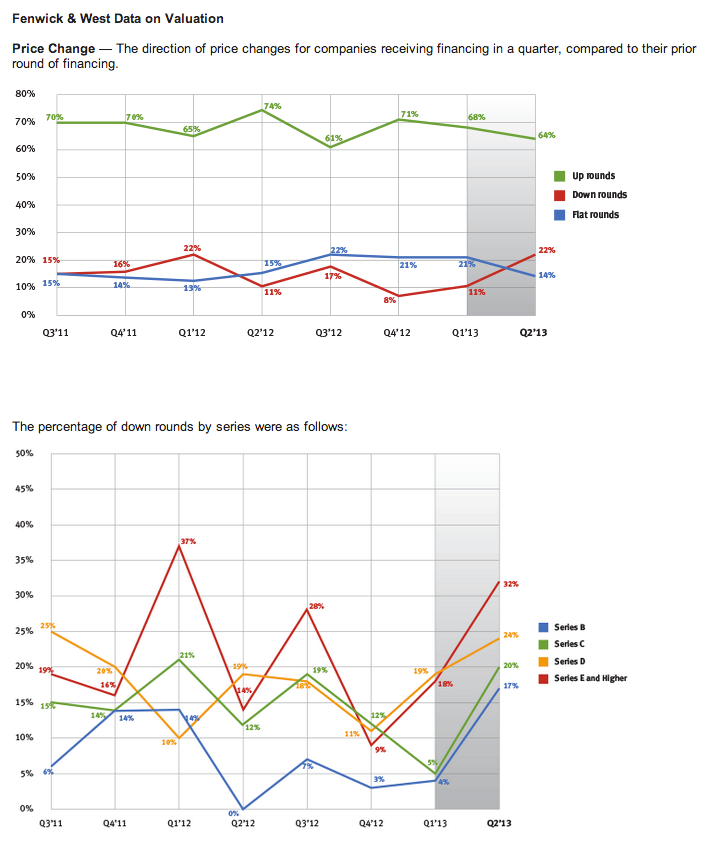 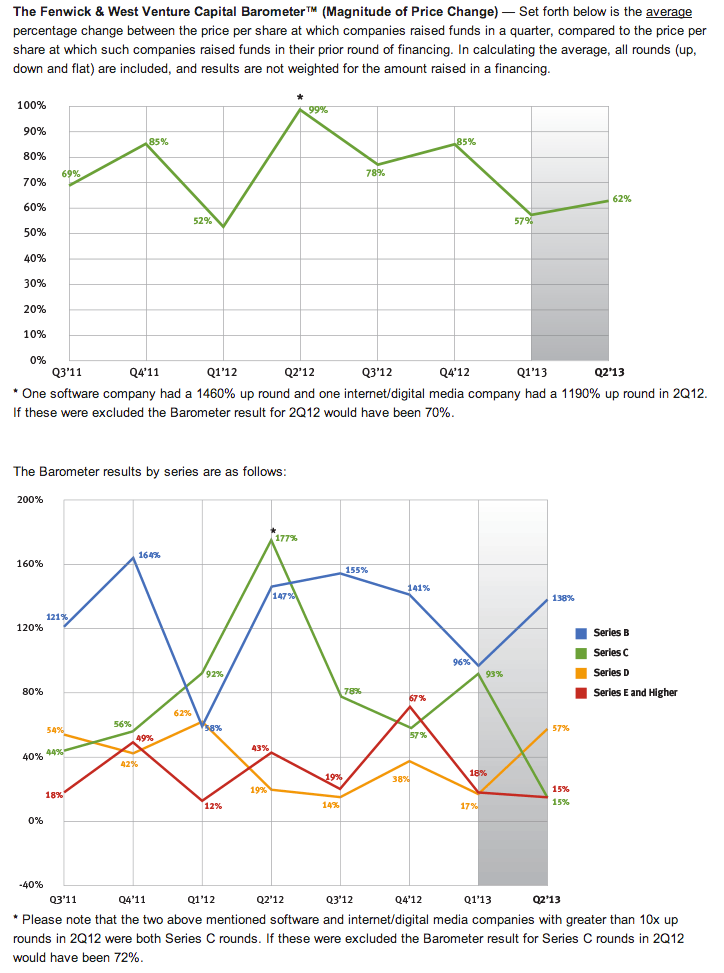 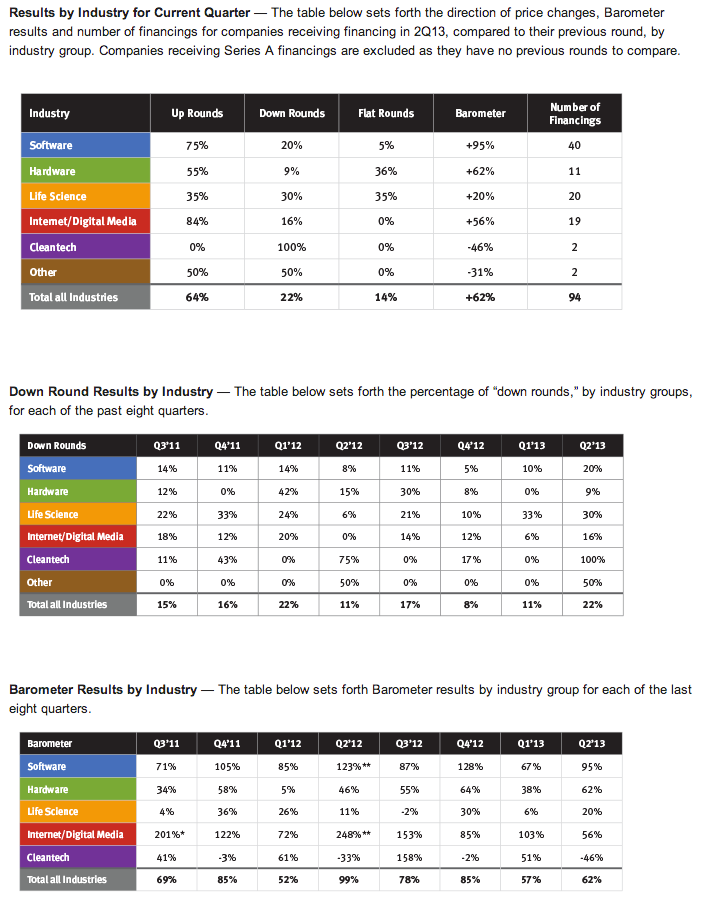 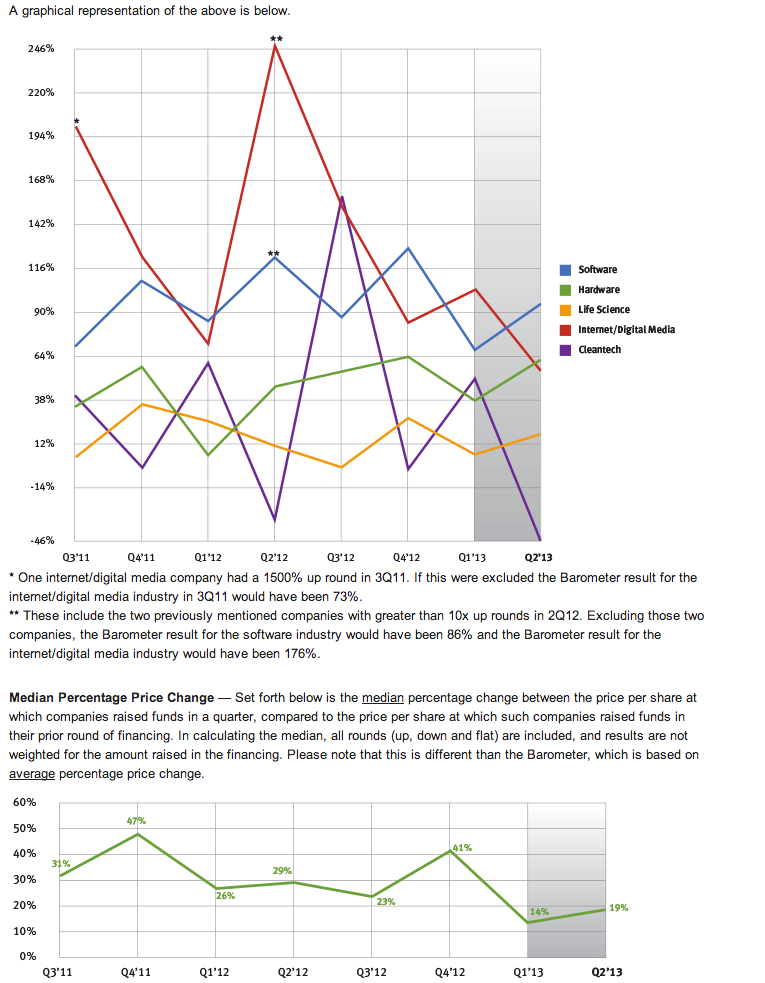 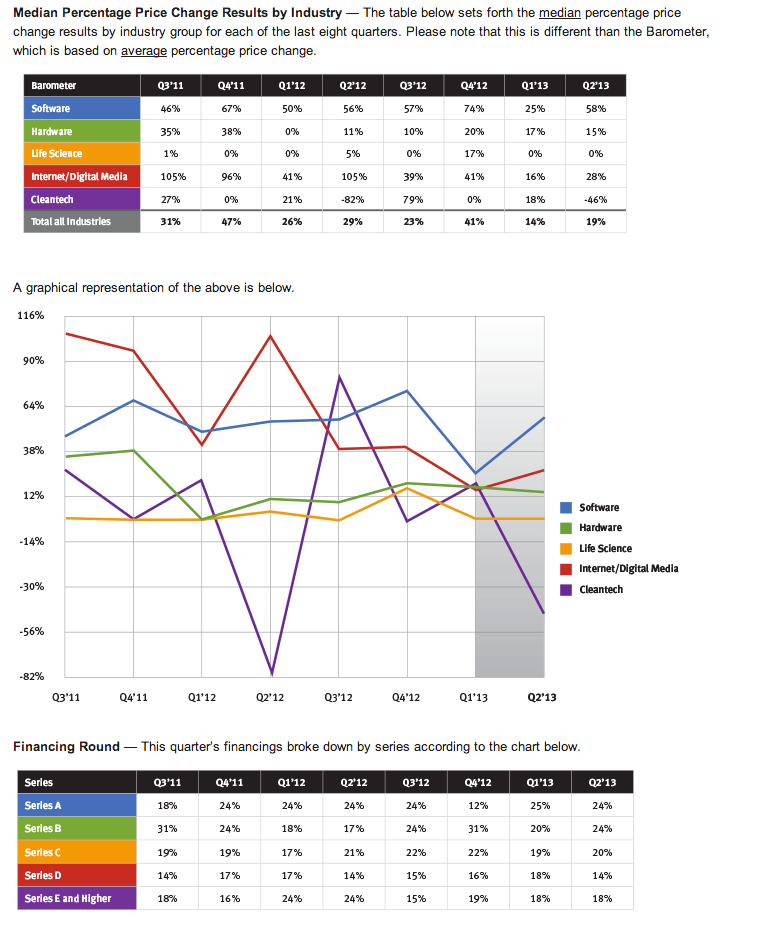 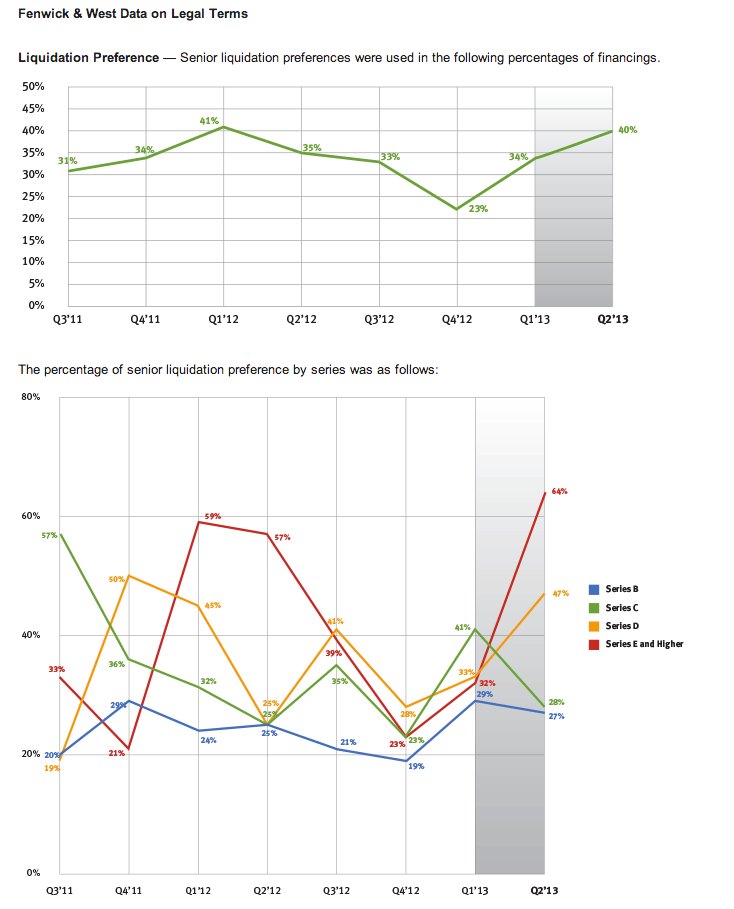 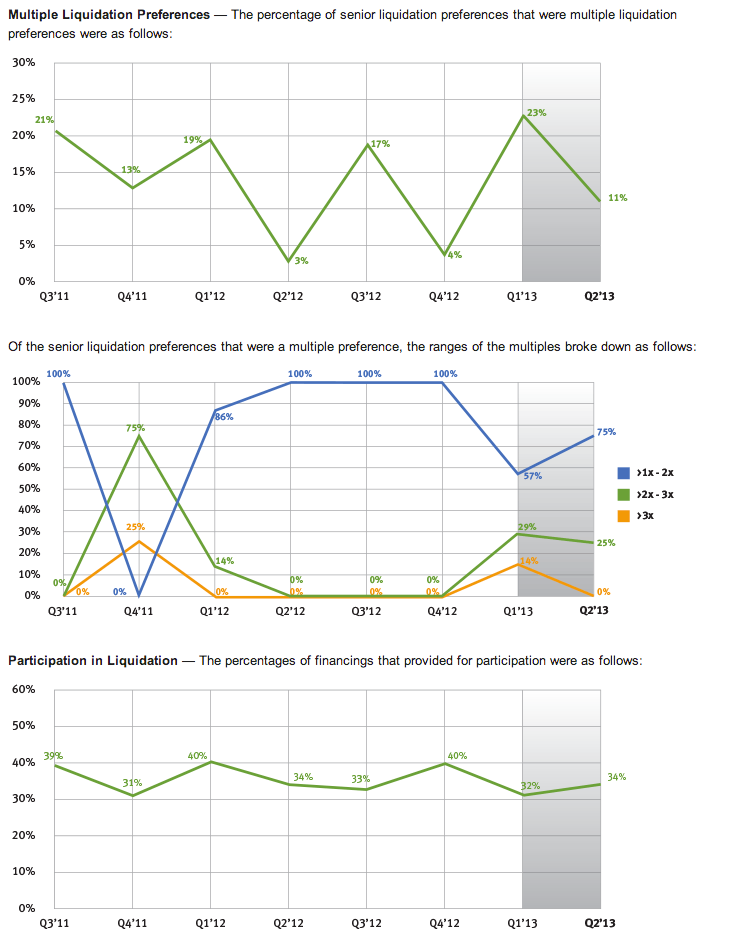 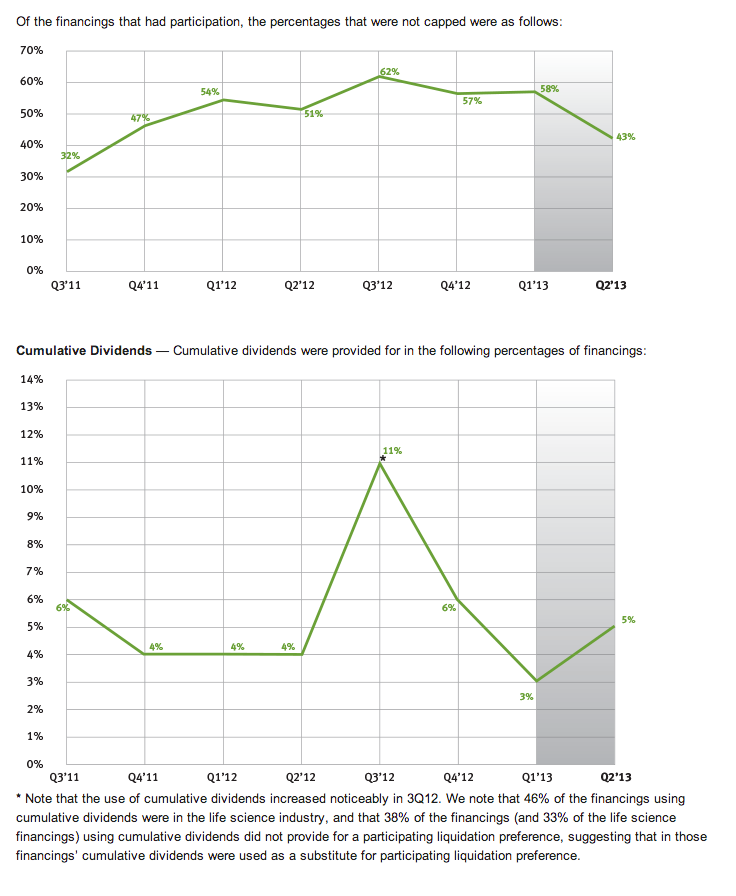 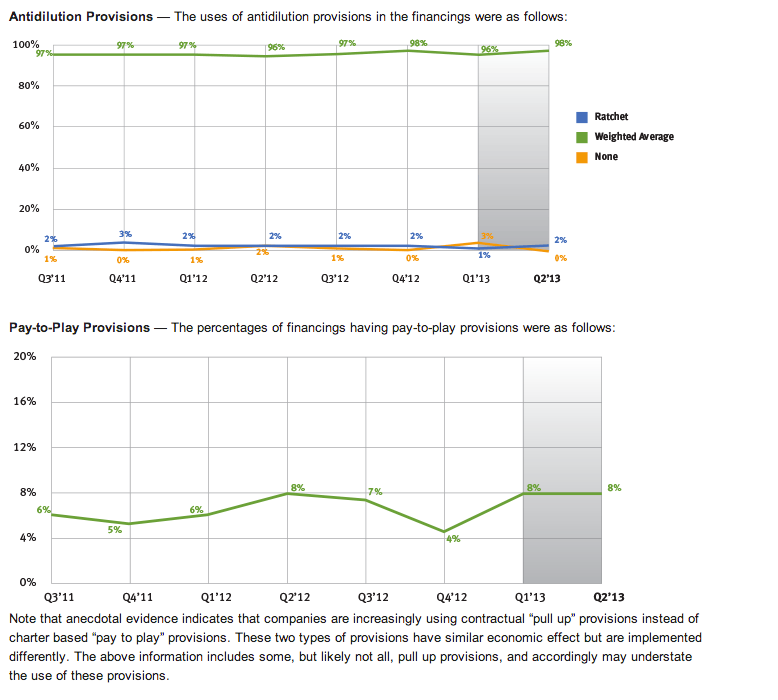 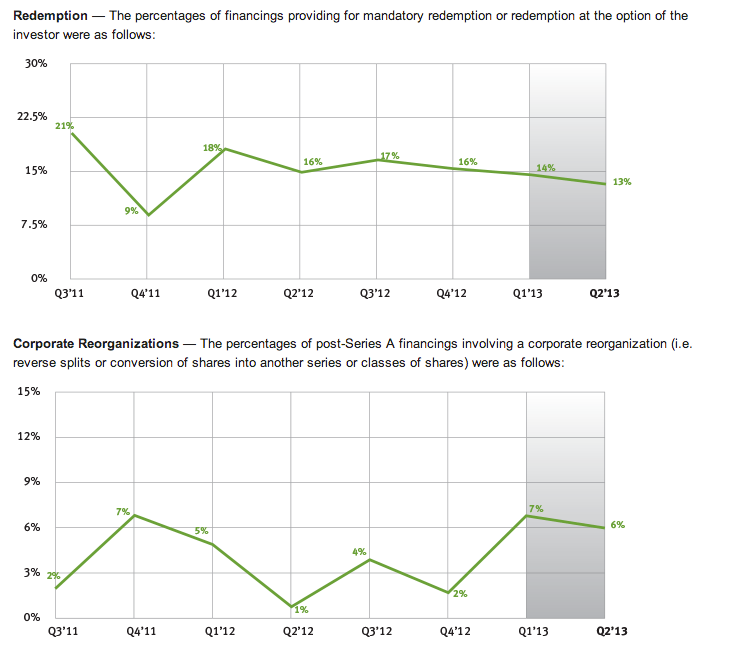 Footnote
1 When comparing current period results to prior period results based on third party data (e.g., amounts invested by venture capitalists, amount of M&A proceeds, etc.), we use the prior period results initially published by the third party for the period, not the results that have been updated with additional information over time, to provide better comparability with the current period published results. For example, when comparing fourth quarter results to third quarter results, we use the initially published third quarter results, typically provided in October, not the updated results that are typically provided in January. Such situations are set forth in our report with a parenthetical as to the date the information was initially reported.

Note on Methodology.
When interpreting the Barometer results please bear in mind that the results reflect the average price increase of companies raising money in a given quarter compared to their prior round of financing, which was in general 12 to 18 months prior. Given that venture capitalists (and their investors) generally look for at least a 20% IRR to justify the risk that they are taking, and that by definition we are not taking into account those companies that were unable to raise a new financing (and that likely resulted in a loss to investors), a Barometer increase in the 40% range should be considered normal.

Disclaimer.
The preparation of the information contained herein involves assumptions, compilations and analysis, and there can be no assurance that the information provided herein is error-free. Neither Fenwick & West LLP nor any of its partners, associates, staff or agents shall have any liability for any information contained herein, including any errors or incompleteness. The contents of this report are not intended, and should not be considered, as legal advice or opinion.

Mr. Kramer represents a wide range of technology and life science companies, from privately held start-ups to publicly traded companies, as well as prominent venture capital funds. Mr. Kramer has spoken numerous times on various business and legal topics, including teaching an accredited course at UCSF entitled "A Scientist's Guide to Intellectual Property" and speaking at various PLI programs related to venture investing. He is the author of a quarterly venture capital survey, as well as a firm brochure on technology licensing. Mr. Kramer is licensed as a Certified Public Accountant in the State of Maryland. His emphasis is on: Start-Up Issues, Venture Capital Financings, Mergers and Acquisitions, Initial Public Offerings, Joint Ventures and Technology Licensing.

Fenwick & West LLP (www.fenwick.com) is a national law firm that provides comprehensive legal services to technology and life sciences clients of national and international prominence. We have approximately 300 attorneys, with offices in Silicon Valley, San Francisco, Seattle and Boise.

For additional information about this report please contact Barry Kramer at 650-335-7278; bkramer@fenwick.com or Michael Patrick at 650-335-7273; mpatrick@fenwick.com at Fenwick & West. The contents of this report are not intended, and should not be considered, as legal advice or opinion.

To be placed on an email list for future editions of this survey please go to our VC Survey sign up page.

Material in this work is for general educational purposes only, and should not be construed as legal advice or legal opinion on any specific facts or circumstances. For legal advice, please consult your personal lawyer or other appropriate professional. Reproduced with permission from Fenwick & West LLP. © 2013 Fenwick & West LLP.