Foreign PE fund Oaktree Capital completed the largest deal in the third quarter, which accounted for 78 percent of the dealmaking. It acquired Veolia Israel, a provider of water, waste and energy management solutions for $475 million.

Rick Mann, Partner and Head of M&A at GKH, noted: "The Israeli private equity market data continues to show that Israeli private equity funds tend to be the most active in the Israeli market, but foreign private equity funds are generally behind the larger size transactions. The quarterly data tends to be influenced by one or two large transactions, and that is a pattern we expect to see continuing with significant investment opportunities in both the technology sector and the financial and industrial sectors."

The IVC-Online Database maintains data on 30 active Israeli private equity management companies with a total of $8.5 billion under management. Since the beginning of 2014, 12 Israeli PE funds raised $1.2 billion to date, and twelve additional funds are in the process of capital raising. 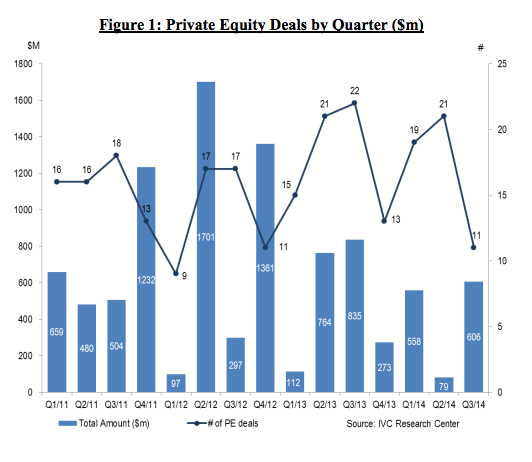 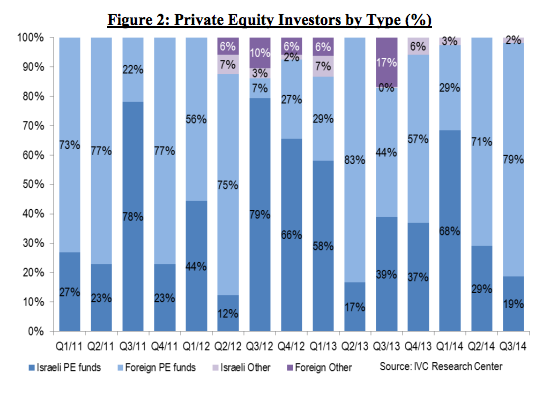 The Summary of Israeli Private Equity Deals Q3/2014reflects information developed from IVC's Quarterly PE Survey, sponsored by Gross, Kleinhendler, Hodak, Halevy, Greenberg & Co., and reviews Israeli private equity deals involving Israeli and foreign private equity funds and other investors, both Israeli and foreign. The current survey is based on the activity of 100 private equity funds of which 30 are Israeli and 70 are foreign. This survey reviews the following types of private equity financing deals: straight equity, buyouts, mezzanine, distressed debt and turnaround/distressed equity. The data are based on information received directly from the funds and from the IVC-Online Database (www.ivc-online.com).

About the authors of this survey:

Material in this work is for general educational purposes only, and should not be construed as legal advice or legal opinion on any specific facts or circumstances, and reflects personal views of the authors and not necessarily those of their firm or any of its clients. For legal advice, please consult your personal lawyer or other appropriate professional. Reproduced with permission from IVC Research Center. This work reflects the law at the time of writing in November 2014.