Koby Simana, CEO of IVC Research Center, remarked, "The hike in capital raised by Israeli high-tech companies directly reflects the continuing increase in the number of large deals, which we described a few months ago. Our annual review of the findings shows that large deals accounted for 3 percent of total deals, at most, until 2014, while in 2014 the share doubled. Capital raised in large deals more than doubled in 2014, totaling over $1.3 billion. This demonstrates that not only is the number of large deals growing, but their size is increasing as well, with a number of very prominent deals reflecting the trend, such as the Landa Corp., IronSource and Kaminario extra-large rounds," observed Simana.

Ofer Sela, partner in KPMG Somekh Chaikin's Technology group commented that "during 2014, some 39 companies completed financing rounds exceeding $20 million, positioning these companies to continue their market expansion. We believe that the maturity level of Israel-based companies in 2015 will attract private equity investors, resulting in even higher amounts raised per revenue-growth company."

Simana addresses the findings, saying "The fact that the number of deals in the $5 million to $20 million range increased consistently throughout the past year shows the ability of Israeli technology companies to attract capital. It has been said by some that you raise money whenever it's possible. It certainly looks like Israeli entrepreneurs are learning the lesson well, using the opportunity to raise more capital whenever the market allows the, which also explains why the relative number of small deals below $5 million has somewhat declined, though they still constitute the largest portion of deals," he concluded. (Chart 2)

In 2014, 392 VC-backed deals totaled $2.36 billion or 69 percent of total capital invested. This compared to $1.7 billion (75 percent) in 2013 and $1.3 billion (73 percent) in 2012. The average VC-backed deal size reached $6 million, well above the six-year $4.3 million average. Ofer Sela believes this trend will persist, saying "with the strong positive sentiment in US public markets and current economic conditions, we expect 2015 to be a robust year for VC-backed Israeli companies."

Capital Raised by Sector and Stage

In Q4/2014, 22 late stage companies continued to lead all investments – as they did throughout 2014 – with $381 million (34 percent). Fifty-seven early stage companies raised $366 million (33 percent), while seed investments attracted 4 percent, in contrast to the unusually strong previous quarter when seed accounted for a 9 percent share of total capital raised.

Interestingly, the share accounted for by firms in the initial revenue stage in 2014 dropped to 26 percent from 47 percent in 2013, when the stage led all investments. At the same time, capital raised from late stage companies accounted for 39 percent, compared to just 20 percent in 2013. Seed companies maintained their 5 percent share over the two last years. 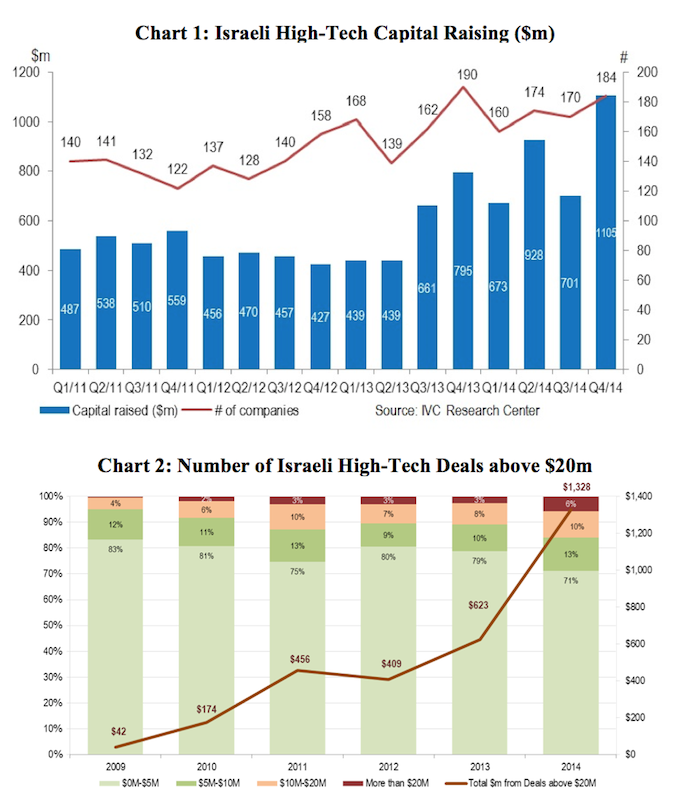 This Survey reviews capital raised by Israeli high-tech companies from Israeli and foreign venture capital funds as well as other investors, such as investment companies, corporate investors, incubators and angels. The Survey is based on reports from 92 investors of which 39 wereIsraeli VC management companies and 53 were other entities.

The survey covered total investment in the Israeli venture capital sector, including both VC-backed rounds where at least one investor participating in the round was a VC fund, as well as deals not backed by venture capital funds. For more on our methodology, please click here.

About the authors of this report:


KPMG Somekh Chaikin's technology professionals offer insights and experience accumulated from a long history of work with technology and life science companies. Through a global network of highly qualified professionals in Israel, the Americas, Europe, the Middle East, Africa and Asia-Pacific, KPMG helps clients address the opportunities and challenges driven by new business models such as cloud computing, mobile services and others. KPMG is a global network of professional firms providing Audit, Tax and Advisory services. KPMG operates in 146 countries and has 140,000 people working in member firms throughout the world.

Material in this work is for general educational purposes only, and should not be construed as legal advice or legal opinion on any specific facts or circumstances, and reflects personal views of the authors and not necessarily those of their firm or any of its clients. For legal advice, please consult your personal lawyer or other appropriate professional. Reproduced with permission from IVC Research Center. This work reflects the law at the time of writing in January 2015.